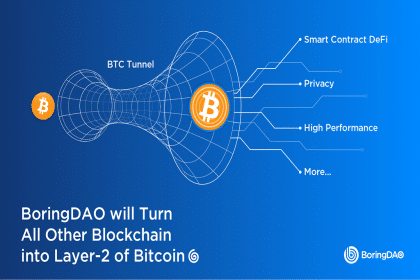 Whether you are a Bitcoin Holder or not, you would have to spend 5 minutes getting to know this project that may change Bitcoin’s future.

Suppose you are not only a holder, but also a Maximalist. In that case, congratulations, the Bitcoin you love is about to regain everything it has lost (for example, Bitcoin Dominance). BoringDAO is a project whose name may sound boring, but some of the most exciting work is currently going on. BoringDAO is a cross-chain compatible, decentralized asset protocol, and its most important product is bBTC (BoringBTC). They provide Bitcoiners the access to all the different Defi.

Even though scalability and safety allow Bitcoin to become the most popular cryptocurrency, a programmable Bitcoin is still what the community has long expected. The community is eager to use $BTC to participate in the MakerDAO’s collateral or be freely exchanged with other Cryptos in the Uniswap. There are already some pioneers in the ‘race’: WBTC & renBTC. According to the latest data (03/10/2020, https://debank.com/ranking/btc), the number of WBTC on Ethereum has reached 92,583, while renBTC is 23,855. Even though the TVL seems relatively high, compared to the total number of Bitcoin (18,505,343), it only occupies 1/154 of the total $BTC. In other words, even if the APY is 100%-10000% in DeFi, merely less than 0.6% of Bitcoin enters the Ethereum network through the above two gateways.

Why? The reason is simple: people need a safer and more decentralized way. In WBTC, BitGo is the only custodian. Since BitGo is the only institution that holds users’ assets, there might be a chance of a single point of failure. In terms of renBTC, they proposed a brilliant idea: renVM. But renVM are still in the sub-Zero stage; therefore, it seems that the team manages these Bitcoin at now.

BoringDAO proposed a “double pledge mechanism.” Each Bitcoin is backed by more than 200% of assets, including one real Bitcoin (multiple reputable institutions manage Multi-sig). The approximately equivalent value of ERC-20 assets is locked in the contract layer (governed by smart contracts). There is no doubt that 200%>100%, so bBTC maybe much safer. Once the underlying assets of other wrapped BTC have issues, its wrapped token will be in danger. However, in BoringDAO, even if there is a black swan event, the contract layer provides an additional protection. Many people would ask: How about the capital efficiency of BoringDAO?The answer is high.

The secret behind is our Double-Pledge mechanism:

Meanwhile, the BOR community and BTC holders will help each other:

It is Incentives that Drive the BoringDAO Business

The two incentives program, Mint Mining and Boring Farm, are uniquely designed for bootstrapping and providing a use case for bBTC in the early stage.

All Blockchains Can Become Layer 2 of Bitcoin

This “boring” project’s business is very smooth: the introduction of incentives and the fair distribution allow our community to grow and prosper while maintaining security. Moreover, not only on Ethereum, this model can run on more blockchains. In the future, Bitcoin will be obtained kinds of features through BoringDAO. If BTC wants smart contracts or enter the DeFi world, then enter Ethereum. If BTC wants high performance, then enter Tron and EOS. If BTC wants anonymous transaction, then enter blockchain with Zero-Knowledge Proof.

BoringDAO is the one stop solution to all demand! These end up with a spectacular imagination: all blockchains (Ethereum, EOS, and even Libra) may become Layer 2 of Bitcoin. Don’t waste your time arguing those guys who support a larger Block. Bitcoin should adopt the safest Layer1, and BoringDAO + Layer 2 will give Bitcoin the infinite scalability. BoringDAO is the infrastructure for the next Bitcoin bull run. With it, you can use your favorite Bitcoin to pay for coffee, as well as participate in decentralized finance without selling your $BTC.

Today, Bitcoin dominance amounts to 60% of total cryptocurrency market cap. This means just by Bitcoin alone, over 60% of crypto’s total market cap is currently left out of the Ethereum-led DeFi world, even with the help of projects like renBTC and wBTC. If the ultimate goal of blockchain is to decentralize while interconnect everything, BoringDAO will be an important piece to the puzzle. To say BoringDAO is the infrastructure of the future is a gross understatement; BoringDAO is the future. With the leading blockchain investors like DeFiance, Hashkey, SNZ, Youbi, Altonomy, DeFi Labs and some BTC miners joining BoringDAO, and strong partners such as HashQuark, Peckshield, DODO, Band and Link, BoringDAO is ready to allow 1M BTC into the DeFi world in a decentralized and safe way.